On 24 September, trade unions belonging to the recently formed Majelis Pekerja Buruh Indonesia (Indonesian Worker Employees Assembly – MPBI) have called for a national strike for October 3. They are expecting 2 million workers to join the strike in at least 21 towns with large manufacturing sectors. These towns are spread over all Indonesia’s major islands: Java, Sumatra, Kalimantan, Sulawesi and West Papua. The strike’s demands are for increases in the official minimum wage, an end to all outsourcing arrangements, and the extension of the implementation of new health insurance legislation to the whole working population, with insurance premiums to be paid by employers. The MPBI was formed in the lead up to the 2012 May Day and comprises three of the largest trade union federations in Indonesia. During the last decade, since the fall of the dictator Suharto, the number of new or reformed enterprise-based trade unions has mushroomed in Indonesia, although still only covering a tiny percentage of the urban workforce. In the last few years, many of these enterprise unions have been merging into federations. These federations have not yet developed significant specific political features or sectoral bases. 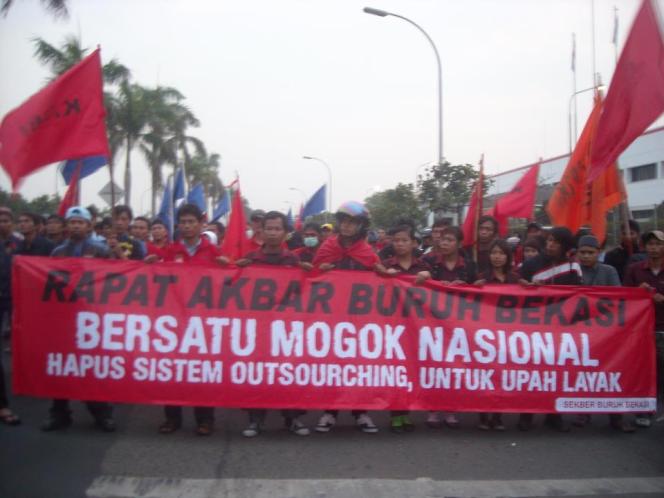 There are many unions and some federations that are outside the MPBI. One of these is the Sekretariat Buruh (Workers Joint Secretariat), whose leaders share a more politically radical, left ideological outlook. The Sekber is also calling for their members to support the MPBI initiated strike action.

The calling of this strike, even before we can assess its success or failure, represents a qualitative change in the Indonesian political terrain. Since the fall of the dictator Suharto in May 1998, there has been a vacuum of leadership – whether false, mis-leadership or genuine leadership – from all social classes, including the bourgeoisie and petty-bourgeoisie, as well as the incredibly heterogeneously and unevenly evolved urban and rural working class. There is a working population of about 90 million people in Indonesia’s cities and towns. The emergence of the MPBI is the first signs of a potential labor sector-based political leadership. Its leaders, in the course of a month’s lead-up to this strike, have attracted increasing media profile. The demands they are raising, while not at all radical and within the current government’s legislative programme, have wide appeal beyond their own immediate membership. The official minimum wage will impact – at least in theory – on the whole workforce. The MPBI is also calling the strike in co-operation with the Committees in Alliance for Social Security (KASJ) which successfully campaigned for (a premium based) national health insurance legislation, passed in mid-2011, and which also involved significant trade union mobilisations.

Perhaps even more important as been the steady increasing willingness of factory workers, especially in industrial estates located within the manufacturing sector, to mobilise and strike. Hundreds of thousands have been on strikes since January this year. While there are no signs of political radicalization spreading among workers at this point – demands are for very modest improvements in wages and conditions – there is a very clear increase in the level of combativity. This more self-confident combativity is linked to the successes of the January 2012 mobilisations in Jakarta involving more than 200,000 workers, as well as the earlier success of the KSAJ campaign for health insurance legislation. A widely reported 4 month long militant strike by workers at Freeport mine in 2011 is also said to have inspired workers in other parts of the country. The January Jakarta strike also pioneered the tactics of “geruduk”, where strike workers from one factory would visit the neighboring factors clustered in industrial estates and use the moral motivation of a large numbers of fellow workers outside the gates to encourage other factories to come out. Striking workers have also organized blockades of major highways, attracting major front page newspapers. In fact, strikes of this kind, around opposition to outsourcing, for wage increases and other improvements in conditions, have become almost daily phenomenon somewhere in the country over the last 12 months.

The increasing self-confidence and combativeness of workers in their struggles for economic and social security improvements is probably also being helped by the recent rapid growth in the manufacturing sector, being driven by automobile and motor bike assembly (with some component manufacture in Indonesia also). Industry associations are predicting sales of 1 million cars by the end of 2012, with even more motorbikes coming off the production line. The steady growth of a middle class with almost first world levels of disposable income – now maybe even 20 million strong – is also fuelling demand for locally assembled electrical and white goods.  This expansion (still from a disastrously low post-colonial base) has been fuelled by substantial increases in state and private revenue as a result of the high prices of mineral exports, in particular to China. This situation has now lasted for several years and has given unions in the manufacturing sector a considerably enhanced bargaining position.

The overtly left-wing unions, organized in Sekber Buruh, are rightly supporting this strike. Consolidating a universal health insurance system for all citizens, with employees paying all premiums, whatever deficiencies the legislation has and however quickly the system will later subvert it, is an important ideological win for the masses. Forcing the government to apply it to all systems, not partially as the government has said it will try to do, would deepen that win. The spreading combativeness of the manufacturing sector workers, especially into the ‘core’ sectors of the larger urban factory economy, is also a welcome new feature of the political terrain.

While self-confidence and combativeness have spread dramatically – something which will be tested publicly on a national scale on October 3 – political radicalisation is yet to emerge as a significant feature of these developments. The combativeness and the positioning of organised labour in opposition to the government on these issues does, of course, make a political radicalisation more possible, if any new political leadership emerges on the political terrain presenting a radical line of march. The heartland of the new organised unions is in the area around Jakarta, mostly positioned in West Java.  This has meant that local politicians from the elite-run parties, such as the Indonesian Democratic Party of Struggle (PDIP), have also been trying to intervene to build a support base for elections among the unions. The leaders of the unions also held an audience with the PDIP nominated candidate for governor of Jakarta, Joko Widodo, who has been campaigning alliance with the militarist GERINDRA party of former general Prabowo. Other union leaders have relations with the modernist Islamic fundamentalist party, the Justice and Welfare Party (PKS).